October 04, 2012
Way back when I was a kid, my mom used to make bread pudding. She also had two different sauces and you never knew which one she felt like making until it was on the table.Sometimes it was a glossy lemon sauce. Sometimes it was whiskey sauce.

I've had tons of bread pudding over the years and I keep changing what goes on top.  That depends on what ingredients I've added to the bread pudding itself.  Chocolate chips baked into the bread pudding with Chantilly creme on top is really good. I also happen to love the recipe below with pecan praline sauce on top. 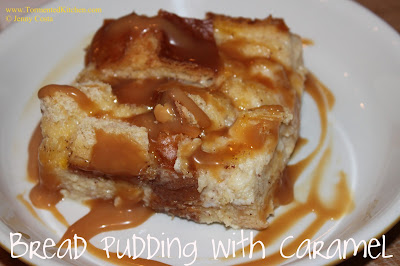 This example has a simple homemade vanilla caramel sauce drizzle.  Not to shabby for a weeknight, don't you think?

2. Beat together eggs, sugar, cream, milk, vanilla, cinnamon, and salt.  Pour over the bread.  Gently press the bread into the custard to make sure all pieces have absorbed some moisture.

3. Place the pan inside another pan filled partially with water. This is your Bain Marie. Bake at 325F about 1 hour, or until a knife inserted in the center comes out clean. 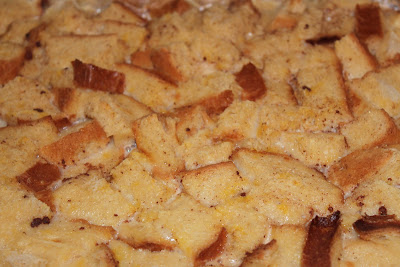 4. Remove the pan from oven. Remove it from the Bain Marie and allow to cool about 15 minutes before serving.

4. I like it warm, topped with some kind of sauce like lemon, whiskey, caramel, chocolate, or whipped cream. Be sure to store this in the fridge.