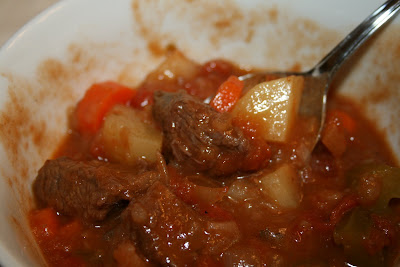 I used to make stew a different way. It was the way my mom made it, which technically happens to be a vegetable beef soup. My "official" stew recipe, this one I'm posting right now, came from Justin's grandmother Rose. The technique of dredging the meat in flour, then frying, helps to thicken the liquid so it's not so soupy, and it adds complexity to the meat flavor. Simmering the meat in tomatoes also tenderizes the meat very well. It works on tough cuts of beef, which may take longer to really get tender. However, it also works well on wild game meats, which typically don't have as much fat marbling as beef, which would make them more dry. We actually made our first meal of Justin's elk as stew, the photos shown here are from that meal. I have to admit, I usually prefer deer meat to elk, but this one is especially tender and mild. This summer we had record amounts of rain and apparently, the game had plenty of tender and tasty greens to eat. I also
Post a Comment
Read more
More posts