Showing posts from December 5, 2010
Show all 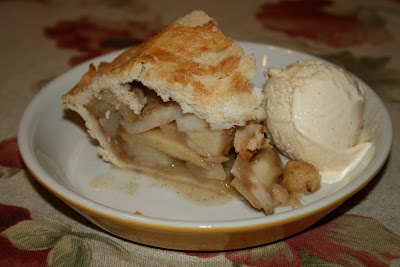 Yesterday, I made pie. I was so excited to bake! I had some nice firm D'anjou pears just waiting to get eaten somehow. It didn't take much deliberation to decide upon a pie. The last time I made pie, the kids were excited too. Yesterday was an off day for them. Eric was completely uninterested in it. Even after I tried to make it sound different and fun by calling it "pear-ple" he was not into pie. Some days are that way. Anyhow, the pie turned out nicely. However, I have a distinct lack of photo evidence. I will admit to digging out the video camera in an attempt to cook and video. This is actually harder than it sounds and I will require a filming assistant (probably Justin) if this is going to become a regular feature. Let me just say for today, for this recipe, no video will be appearing. At least the concept of video cooking is now on my radar. You can refer to some of the other photos from other recipes, Rhubarb Strawberry Pie or Apple Crisp , if you need
Post a Comment
Read more
More posts