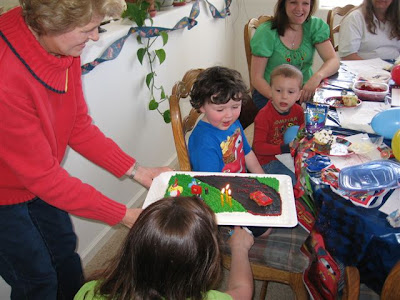 I survived the weekend. Friday night I was busy baking and decorating the cake for Eric's party on Saturday.

Since his party theme was Disney Cars, I took a real normal racetrack idea based on other pictures I've seen on the Internet. I put die-cast cars on the cake. Sorry the pictures are somewhat obstructed. I was so busy being Supermom, I forgot to take pictures of the finished cake before consumption.


Since I was aiming for cute and kid-friendly, I used a box of Pillsbury Funfetti cake mix instead of my usual yellow cake. It was kind of dry and weird. I don't recommend using that flavor.

Decorating the cake went well enough. I divided up the frosting. I used plain white on the sides. I used about 1 cup for the asphalt, 1 1/2 cups for the green grass, and about 1/2 cup for the writing. I noticed while decorating the cake, my hands were hot, so piping the green "grass" with a star tip got messy. I had to clean the tip often and the stars were a bit messy since …
Post a Comment
Read more
More posts