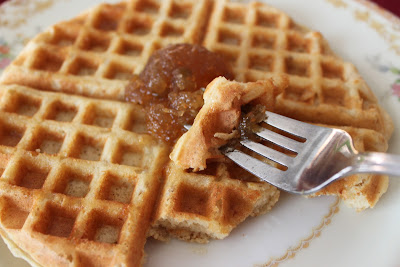 You know who loves breakfast? I do. You know who else loves breakfast? My kids. Sometimes I have to take advantage of the kids and their love of pancakes and waffles. I use it as an opportunity to get them to branch out. I find that often my kids will devour breakfast and then pick and snack the rest of the day, so it's a good time to get something nutritious in them. Ages ago, when I was a teenager learning the basics of cooking, I happened across a British recipe for oat waffles. They were good, but a bit more work than I was willing put out as a 14 year-old. About Thanksgiving, I ran into that recipe again. I hadn't seen it in years. I made it a few times with some changes. I tried using quick oats instead of slow-cooking oats and swapped out the buttermilk for regular milk. They were better. On a lark, I threw in some ground flax and wheat germ. It was so good. These waffles are filling. The texture is really light with a crisp edge and they are a little chewy from the
Post a Comment
Read more
More posts