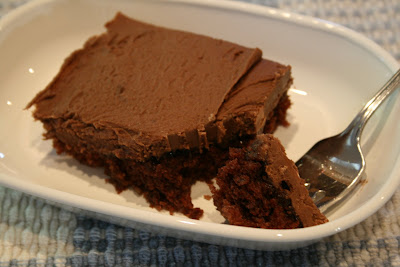 My mom has been making these for as long as I can remember. I had a few birthdays where I asked for these instead of a regular birthday cake. These are nothing like brownies from a box, so if you are used to the typical "thick and fudgy" you're looking in the wrong place. Buttermilk brownies are light, fluffy, cakey, but still plenty rich and decadent. I happen to like mine without nuts, and with a thin layer of frosting. I suppose people that like nuts could add some walnuts or pecans, but I have no idea how much you would want to add. I'll throw out a guess of 1/2 to 1 cup of nuts in the brownie mix. Another adjustment would be to the frosting. I happen to like it thinner and more like doughnut glaze, just how I have it written out below. But if you like thicker, fluffier frosting, you could just add more powdered sugar. An extra cup works well with the amounts of liquids. However, when you make the frosting with more sugar, it's not as pretty and shi
Post a Comment
Read more
More posts