April 05, 2013
Easter time has come and gone yet again. Now, let me tell you something. Usually, I attempt to give up something for Lent, and fail miserably 3 days later. I gave up chocolate for Lent this year. This is not the first time that I've tried to give up chocolate, but it was the most successful time! I was really trying to eat healthier. There was one birthday party with marble cake that I could not resist. For the most part, I was very focused on what healthy things I could eat instead of chocolate. That sort of impaired my inspiration to cook and blog about food.  Now that I've survived the month+ without chocolate, I've managed to put together a few thoughts.

1. I am a chocoholic.
2. I don't have to eat all chocolate all the time.
3. I should only eat the really good chocolate in small quantities.
4. Chocolate will put me into a tailspin of eating. No Chocolate means I'm in better control of what I eat later in the day.
5. I really do like fruits and veggies, but I will neglect them if chocolate is an option.
6. I will enjoy my periodic binge and then return to a reduced-chocolate lifestyle.

Interesting, isn't it?  Also, Easter morning, I overloaded on candy and my tummy immediately let me know just how unhappy it was. So now that I have binged on Easter candy, it's time to re-examine our eating patterns. I'm thinking it's just time to cut back on certain unhealthy things. And with the weather warming up, it's a good time to get active in general.

My Easter dinner with the family was fairly balanced. We had ham, which is traditional for us, mashed potatoes (but no gravy), broccoli smothered in cheese sauce, French bread, applesauce, and chocolate cake for dessert.

I found a lovely ham for us. It was smoked and pre-cooked. I was looking for a ham recipe and realized there are raw hams out there. This is not a recipe that will work on a raw ham. Maybe if you boil or slow-roast it, then you can do the glaze at the end. Just know, this is for a cooked ham that you would heat and serve. 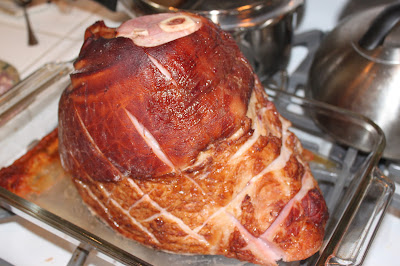 2. Combine the remaining ingredients in a small saucepan. Over low heat, melt them until gooey and spreadable. 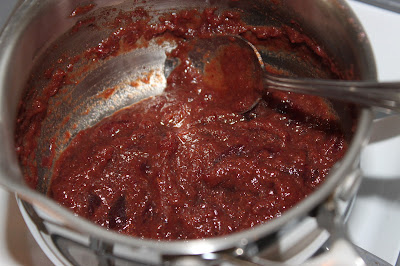 3. Slather the glaze mixture over the ham. Return to oven, uncovered, for another 30-45 minutes. 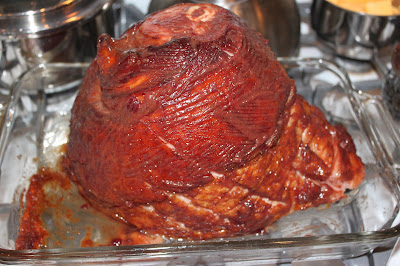 4. You can call it done when the outside is crusty and delicious. 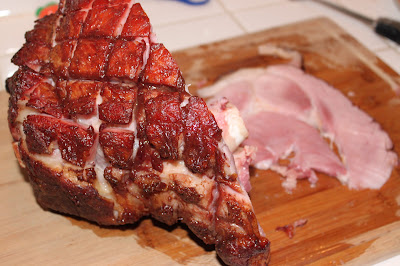 5. Carve up the ham and enjoy! 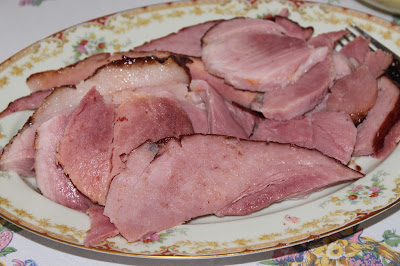