December 16, 2012
Have you heard of Charlie Palmer? Perhaps you recognize the name. He has a restaurant or two. One is in Manhattan, his flagship. There is also one here in Reno. He is the executive chef at the Grand Sierra Resort (or GSR as we locals know it) and the namesake for the Charlie Palmer Steak House.

I was fortunate to get a ticket to this year's annual holiday feast. It was impressive! There was an ice sculpture at the entry to the Grand Ballroom. 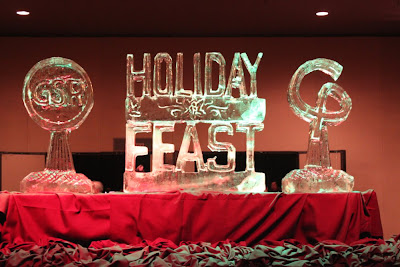 Each course had a wine pairing, but it wasn't a sit-down traditional meal.  Guests were able to go up to serving stations and watch as chefs prepared the food, plated, and garnished it.  It was quite fascinating!

The first thing I tried was the Pheasant Pot Pie with root vegetables and smoked bacon.  It was paired with Napa Cellar's 2011 Pinot Noir. It was beautiful. The "pot pie" crust was actually a chive biscuit. The pheasant was very mild, obviously since it is farm-raised. Wild pheasant has a much more pronounced depth of flavor.The sauce contained tiny bits of root vegetables with large chunks of smoky bacon. 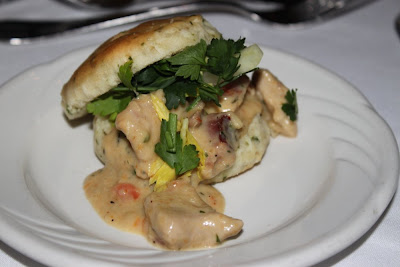 Second, I picked up some lobster risotto topped with a huge lump of lobster with lobster pan sauce. It was accompanied by Grgich Hills 2009 Chardonnay. The lobster was tender and buttery. The risotto was tender without being overcooked. I ate the whole thing! 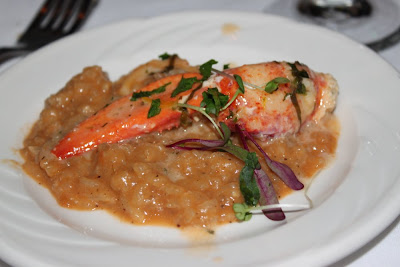 Third, I tried the Pork Belly Porchetta with fruit compote and mustard jus. I think this one impressed me the most.  The fruit compote was not too sweet and it had some spice to it.  The mustard jus was meaty and tasty. The roast pork belly was great! I'm not a big fan of eating plain fat, but the flavor was so good, the combination of it with the fruit and jus was really delicious. 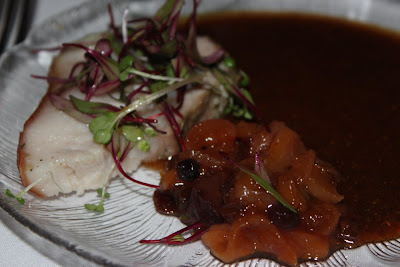 Fourth, I picked up the seafood plate. They provided crab legs already sawn open, crab claws, huge cocktail shrimp, steamed mussels, raw oysters, crab salad "shooters" and tuna-stuffed miniature peppers. The crab legs were my absolute favorite. The shrimp were probably actually prawns since they were so enormous. The crab shooters and mussels were pretty good, too.  This wine paired with this was Carrefour Vineyards 2009 Sauvingon Blanc. It was my favorite wine of the night. 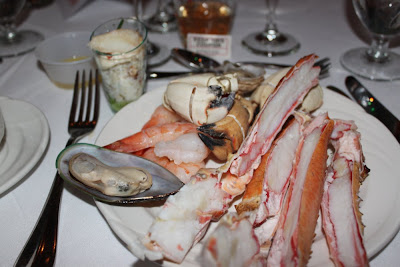 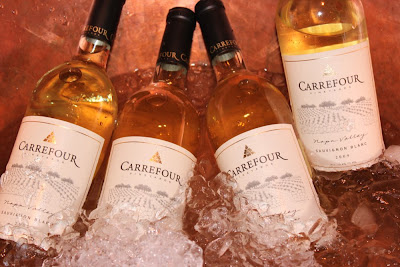 Fifth, I went to the carving station.  They served a black-pepper crusted beef tenderloin with chive pomme puree (or mashed potatoes to normal people) and truffle jus. The beef was just right, medium rare, not bloody, warm, seasoned perfectly. The potato mash was also extra smooth and creamy. It was very nice. The wine was Mt. Veeder 2009 Cabernet Sauvignon, my second favorite wine.

Charlie Palmer was there, and midway through he spoke about the meal. I like it when the big guy comes to event like this. 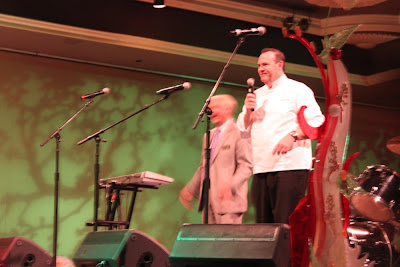 Sixth, I found room to try the pumpkin ravioli. The ravioli contained pumpkin puree, topped with brown butter sauce that contained pumpkin bits, pumpkin seeds, Parmeggiano cheese, fried sage leaves, and some toasted hazelnuts. It was nice. I'm not a fan of brown butter sauce, but the ravioli were pleasant. The filling was very smooth. They chose a 2010 Talbott Chardonnay to go with this. 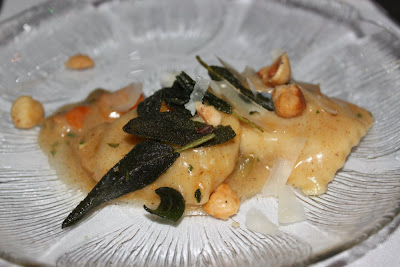 Finally, I made it up to the dessert spread. They had apple strudel with ice cream, but I just didn't have room for that. I opted for a few small chocolates and macarons. The truffles were superb! The chocolate coating was perfectly smooth and crisp, the fillings were amazingly creamy.  The macarons were lovely, not too sweet and mild in flavor. I had to try vanilla, pistachio and chocolate to make sure the macarons were really good. 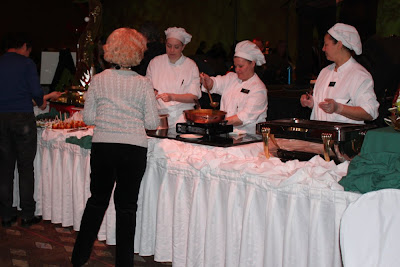 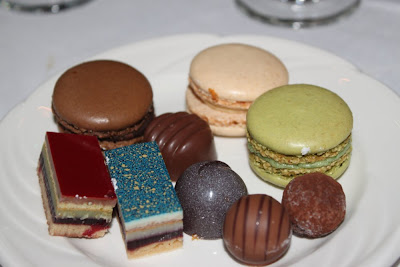 Throughout the evening, the live music was very nice. It was soft enough to actually converse with people around the table! Thanks to the Buddy Emmer Band for keeping it just right.

Overall, this was a fantastic event and if I can make it again next year, I'll be there ready to devour the new creations!