September 11, 2012
Recently, Mom brought me a couple bags of potatoes from her garden. I was quite pleased to get her potatoes since my potatoes failed thanks to bugs.  Darn it for trying to figure out organic gardening.

So what do you make with lots of potatoes?

A while ago, I was looking up French potato casserole recipes, like potatoes dauphinoise and potatoes a la boulangere. They are very similar in technique. Both require peeled, thinly sliced potatoes baked in a dish with some liquid.  Dauphinoise uses cream or milk, while boulangere uses stock or broth. 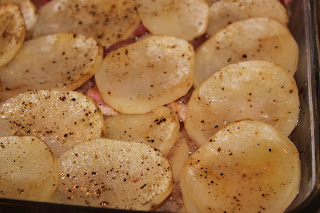 Now let me remind you, food does not turn out perfectly for me every time. I wish it did!

This was tasty, but a bit soupier than I wanted. I managed to use onions from my garden and they were so good! I added bacon because everyone loves bacon and it really compliments potatoes in general.

Method
1. Peel and slice potatoes. I used my mandoline slicer to get them about 1/8" thick. Set aside.

2. Sautee together the bacon and onion until the onions are caramelized. 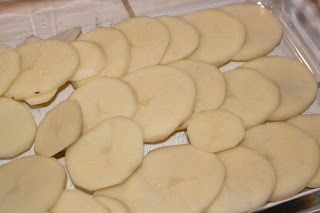 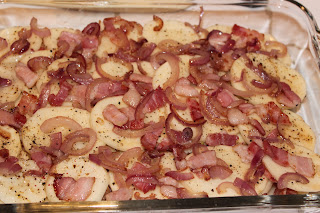 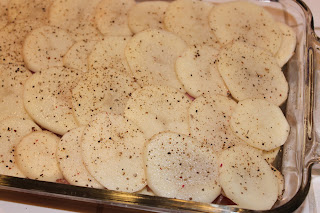 4. Bake in a 400F preheated oven for about 1 hour.  The potatoes should be easily pierced with a fork when done.

5. Let it rest about 10 minutes before serving.  It will soak up some of the stock, but it's still pretty juicy. It may look a little runny, but it sure tasted good. Enjoy!
bacon onion potatoes side dishes Uh Oh