August 19, 2012
I'm not sure who knows or realizes this, but I tried out for Masterchef in December 2011. I also sent in a video the year before since I couldn't make auditions in person. They didn't pick me either time.

However, I'm not fazed.

I'm going to audition again.  Let me tell you, after watching the current season, it's a good thing they didn't pick me because I would have wiped the floors with the competition.  I mean, I'm good at desserts, but I can cook a steak, a burger, sushi, all the kinds of eggs they wanted, you name it. I'm not a pro and have never received any pro training, but I'm way, way better than some of those goofs on the air.

So, dear hubby has presented me with a fun challenge. He's giving me weekly challenges, let's call them Freddy's Mystery Box.  I thought I was off the hook this weekend.  Nope.

Tonight's mystery box was two sourdough baguettes, plus whatever I felt like from the fridge and pantry. Right away my head was flooded with ideas like savory bread pudding, or a fancy sandwich.

I made Basque Garlic Soup with Cheese Bread. 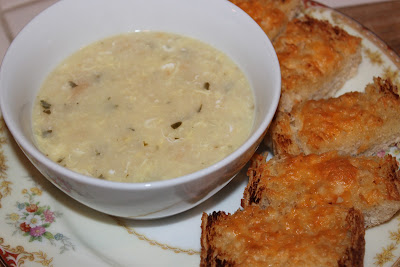 It's basically one of those recipes passed through various people in my hometown so it doesn't have a single source and many, many variations. I sauteed some garlic in olive oil, tossed in cubed sourdough baguette, browned it, then added water. After simmering a while, I stirred in beaten eggs. Then, it was soup. Here's the recipe for the cheese bread.

This soup is unusual. It's not obviously garlicky as you eat it, it's a bit bland. Dunking the cheese bread into the soup was awesome though, more than the sum of it's parts.