October 05, 2011
As I was preparing this post I realized something. It has been ages since I've made dumplings!  Honest to goodness dumplings are so tasty on top of a pot of chicken soup, deer stew, or beef barley soup. These were nice and puffy.

The last time I made dumplings, I tried a German potato dumpling that didn't turn out well. They kept shrinking and dissolving as I cooked them instead of setting up. They were pretty gummy and nasty and made the soup cloudy. I think perhaps something was lost in translation.

This time, my folks were in town so I snagged Mom's trusted recipe. (Thanks Mom!) I think I have my own. Somewhere. At least, I used to have my own dumpling recipe. I'm good at losing recipes. I have tons of cookbooks, tons of recipe notecards, so things get mixed up and "lost" easily.  That is really why I started posting recipes on the internet so many years ago. It was an attempt to keep my favorite recipes somewhere accessible all the time. If I travel, I can jump on the computer and bring up my recipe.

2. Combine other ingredients. Mix until all incorporated. Don't overmix. 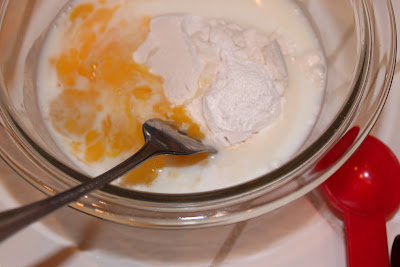 3. Drop by spoonful on top of soup or hot liquidy food. Cover. (Photos below shows dumplings on top of Pork Chops with Apple Kraut.) 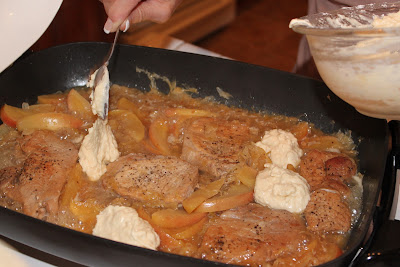 4. Cook about 12-15 minutes or until dumplings pass a toothpick test. 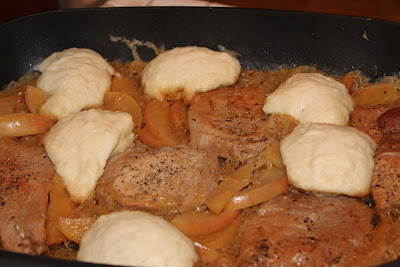 Just a reminder: To pass the toothpick test, you poke a toothpick into the center of a dumpling. When you remove it, the toothpick should remain dry and free from crumbs or wet batter. If goopy crumbs stick to the toothpick, cook them some more.
bread Czech food dinner side dishes