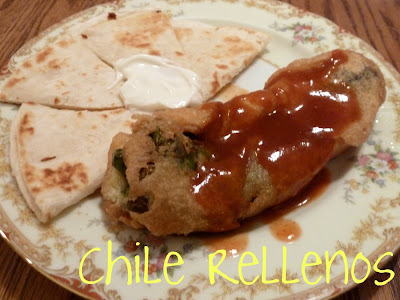 Recently a coworker brought in some beautiful peppers.  As soon as I saw them, I knew they'd be prefect for chile rellenos.  I snatched up four of the little darlings and immediately started to plan dinner.

For this batch, I went with just cheese because I didn't have any leftover meat to add to the stuffing.  But, that is definitely a good idea, if you were curious. Quite a while ago, I went to a Mexican restaurant (which now happens to be out of business) and they had some really good chile rellenos. You could get them stuffed with chicken and  cheese. One was very filling, so it didn't take much to make a satisfying meal.

However, since said restaurant is now shuttered, I've had to attempt things at home.  These were slightly more work than I would normally devote to week-night dinner. I have to say, the pepper prep work was a bit tedious, so make sure you have the time and energy to devote to handling them. And my house smelled like frying oil for a couple days after making these. (I seriously cleaned too!) If that doesn't bother you, then you will probably love this recipe. If you're on the other end of the spectrum, you might want to keep going out to eat in search of the best relleno.

Method
1. Bring a pot of water to a boil. Dunk the peppers in for about a minute, just until the skin starts to loosen. Remove and set aside.

2. I have a gas cooktop, so I fire-roasted the peppers until the skin was mostly charred. You may need to do this part in the oven, under the broiler if you have an electric cooktop, or outside on the BBQ. 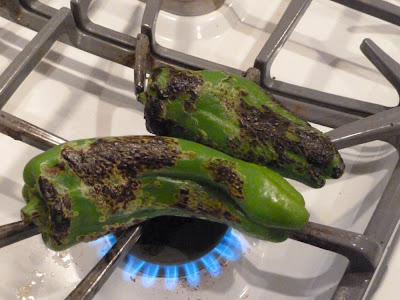 3. Place the charred peppers in a gallon size zip-top baggie with damp paper towels and let rest about 10 minutes.

4. Now, remove the peppers and carefully rub the charred skin off. You want to remove as much skin as possible without piercing the flesh. The flesh will be very soft and pliable.

5. Cut a slit down one side of the pepper, start at the top and go to about an inch from the bottom. Using a spoon, scoop out the seeds and ribbing membrane.

6. Place about 2 ounces of cheese inside the pepper and secure it shut with a toothpick or two. 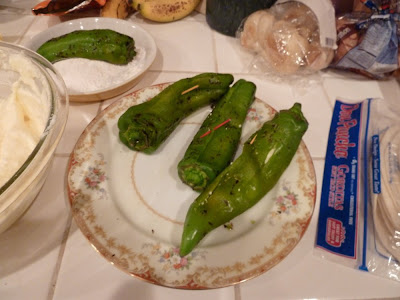 7.  Beat the egg whites until fluffy and stiff.  In a separate bowl, mix the yolks with the salt and flour.  Fold this into the whites, trying to not totally deflate the whipped whites. 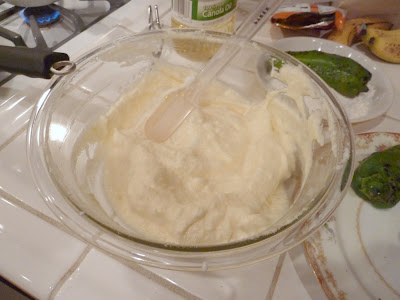 9. Dip the peppers into the dredging flour.  Coat well. Then, dip it into the egg batter, try to coat it evenly. This was messy. Tongs lost grip so I ended up with my hands in the batter.

10. Fry the pepper in hot oil about 2 minutes, start with the seam side down so hopefully the cheese doesn't melt and ooze out into the frying oil. Turn over so the seam is up and fry another 2 minutes or until you reach your desired brownness. 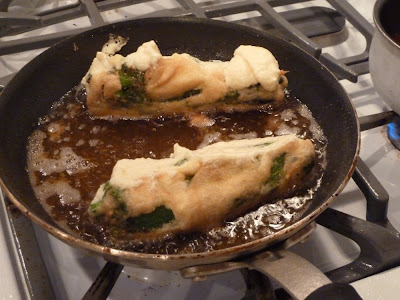 11. Transfer pepper to a paper-towel-lined plate to cool and drain about 2 minutes before serving.

12. Serve with a red sauce poured over top (like an enchilada sauce or other red chile sauce you like) and sour cream. Of course, adding the usual rice and refried beans, makes this a nice meal. I made some Quesadillas as an appetizer for this meal.
bell pepper cheese dinner eggs frying Mexican